The Little Monster is back, ITS NOW A HYBRID AND its bigger than ever!

If you are looking for a big 4150 bolt pattern four barrel carburetor, the Little Monster has you covered.

The Little Monster is a Hybrid of combined Dominator style 4500 series parts and 4150 style components to get BIG cfm from a 4150 bolt pattern carburetor (1300 cfm is where this Monster begins).

With 2.125 throttle blades as a starting point, the Little Monster can feed 1100 horsepower engines and not even break a sweat!!

Equipped with our VENOM series metering blocks, throttle response and shift recovery is insane, so don’t let the big cfm fool you, it won’t be lazy… it will be a MONSTER!! 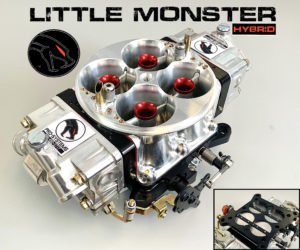